I read somewhere that the written word will be humanity’s only true form of time travel.  It is a method of communicating across the ages thoughts directly from one mind to another.  When you read a word, the writer reaches out across minutes, years, or eons and puts those thoughts directly into your head for examination.

Video, audio, and other means have a similar effect but there are so many competing factors.  The written word is the most direct method.

Is it any wonder, then, that God chose writing to convey His will across all these hundreds of years?  The uniqueness of this medium is manifest in the gravity of the phrase “the Word of God”.  Indeed, in John 1 God Himself is defined as “The Word”.

Ok so shove me in the shallow waters here.  I’m only fixin’ to talk about the government.

It is a trip to think that the direction of government can be completely changed with words.  Pamphlets, newspapers, doorhangers, and facebook post can all convey thoughts to a critical mass of people that will change the course of history.  It’s why our First Amendment is so important.

There are many other examples of how this has happened throughout history, but I want to focus on a collection of moderately obscure works called the Federalist papers.

Most people are familiar with what the Federalist Papers are.  But it seems like very few people (including me) have actually dug into them to any degree.  This is understandable given the sheer volume and density of the material. But in a time when the validity of the US Constitution is questioned at the highest levels of government, I think it might be a good exercise to dig in to such a thorough effort to justify it’s adoption.

In a nutshell, the Federalist papers (simply labeled “Federalist No. #” where # is a Roman numeral) were a series of articles across several New York newspapers arguing in favor of a new Constitution vs. the old Articles of Confederation.

Federalist #1 was published in “The Independent Journal” on October 27, 1787, and was written Alexander Hamilton.  One month earlier, the new Constitution had been proposed.

There really are some good tidbits in these documents.  You can read Federalist number 1 by clicking on this link.

It has been frequently remarked that it seems to have been reserved to the people of this country, by their conduct and example, to decide the important question, whether societies of men are really capable or not of establishing good government from reflection and choice, or whether they are forever destined to depend for their political constitutions on accident and force.

-“Publius” in Federalist No. 1

Here are my summarizing points:

So essentially Federalist #1 is an opening statement for the series.  It talks a little about why they are being written, what they hope to accomplish, and what points they are going to make.

It’s interesting to think that some of the most fundamental values and structures of our country were once open to such debate.  I’m looking forward to digging in further.

Like any child of the 80’s who’s into tech, I’m fascinated by the idea of self driving cars.  The only thing cooler would be flying cars, but it seems we’ll have to keep crawling before we can fly.

However, the reality is proving to be more difficult.  Delays and complications abound.  And predicting timelines has become foolhardy.

The obvious issue  is that driving is very, very complicated and unpredictable.  So much so that human minds get routinely confused.  It just makes sense that artificial minds will have the same issues.  It makes sense that this is a very difficult problem to solve and it will take awhile to do so.

But there may be ways to speed up the process.  And there may be tragic events that will suddenly slow down the process by many years or decades if we’re not smart about all this.  Let’s start with the latter. 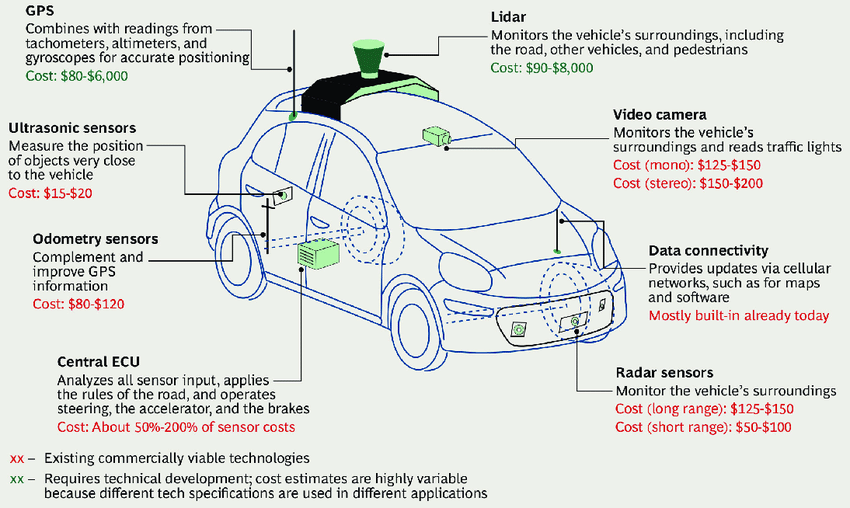 Lidar and Radar and Cameras, oh my! The complexity in feeding information to self-driving AI is very complicated. It should give us new appreciation for our own 5 senses. Source: Boston Consulting Group

Artificial Intelligence needs tons of data to learn.  This means that AI engines will have to spend huge amounts of time to get the tons of data needed to learn how to drive our roads.  I think we’re learning that our roads are more complicated and unpredictable than we thought.  Which means the AI behind autonomous driving will take more and more data.

Telsa uses “shadow mode testing”, in which the AI engine pretends to drive a car, and its decisions are tested against the actions of a real driver.  The large number of Telsa drivers helps in this regard.

Yet driving is dangerous.  A mistake in driving can cost lives.  So the question quickly becomes “what is our tolerance for mistakes by self-driving cars?”  Are we willing to sacrifice lives so that cars can learn to drive themselves?

I think the answer is very likely to be “no”, and probably a more resounding “no” than we anticipate.  There have already been some episodes of loss-of-life related to autonomous cars.  And there have been odd attempts to cover up some close calls.  But the day we have a high profile event–a loss of a family of four, a school bus accident, an elderly veteran run over–public (and legislative) opinion will shift quickly against the current tech.

An episode like that will be tragic for the individuals involved, but it will also set the autonomous vehicle effort back for decades.  People are too important, and this tech has too much potential to let that happen.  So what can we do?

When it comes to autonomous driving, all the attention is on the cars themselves.  That make sense given the ‘cool factor’ and the agency of the companies making the cars.  This is where the work is.

A huge part of advancing autonomous vehicles, I think, is to develop a set of standards and guidelines that will certify a road for autonomous cars.  Autonomous driving should require this certification.  It would include things such as:

Federal and state highways would be pretty easy to outfit, as they already follow standard guidelines.  The obvious issue will be local and rural roads.

Google’s self-driving project addresses part of this situation by mapping every area’s detail ahead of time.  This approach has a similar effect, in that it ‘certifies’ every road by documenting its features ahead of time.  There are a couple problems with this, however.

First, it is a daunting task.  Even with the resources at Google’s disposal, it is nearly impossible to map every road.  Indeed, Google street view still misses huge chunks of coverage despite the significant effort to cover everything.   And you can’t underestimate the tendency in some places to consider mapping a privacy concern.

Second, streets change and those changes could have significant implications.  Using street view as a reference, it’s not uncommon to find places that haven’t been visited for many years…again despite a very comprehensive effort by Google.

Adding and adopting street standards and certification would help Google’s approach and speed up the process.

There are no guarantees in life.  Walking out the door has its own level of risk.  But when it comes to life-and death safety, we should mitigate these risks as much as practically possible.  When it comes to AI, autonomous driving, and self-driving cars, I think it’s obvious that a set of standards and a requirement for certification is required.  Moving in this direction now will allow us to leapfrog both delays in adoption, and tragedy in achieving adoption.

I was reading through my old blog archives the other day.  As I parsed through the slow slog of daily entries, I realized just how bad things have become over the last 10 or so years.  The internet used to be a positive place.  Full of interesting things and cool information.

Back then, it wasn’t about likes or re-tweets/shares/broadcasts.  It was just a fun way of putting some things out there that people might enjoy.  There was less concern about how many people were interested in what you said(although you knew a certain number were), and you really didn’t have all that much information on how many did anyway.

I’ve also looked at old social media archives from the 2010 era, and the realization was similar.

This used to be fun….

What in the world happened?

I know ‘blogging’ is dated and all this sure seems like a hackneyed good-ol-days rant.  But I think there’s more to it.

Let’s explore what happened.  And further, let’s NOT resolve to fixing it.  The internet is still an open and positive place if we’ll let it be.  But we can’t build on the things that took it awry.  We have to step back and look at the fundamentals.